Since 2002 the British Government has progressed with passing legislation that grants the state additional powers for depriving citizenship so that since 2006 the Home Secretary can deprive a person of their citizenship if they deem it ‘conducive to the public good’ to do so, and since 2014 can make a person stateless if the Home Secretary believes they can obtain citizenship elsewhere. Between 2002 and 2016 over 70 people were deprived of their citizenship, almost none have managed to appeal this decision successfully and many are stranded abroad, some stateless. Citizenship stripping powers were passed and extended in 2002, 2006 and 2014 respectively.

‘A Kafkaesque nightmare’: The Growing Use of Executive Power

The deprivation order issued by the Home Secretary looks something like this: 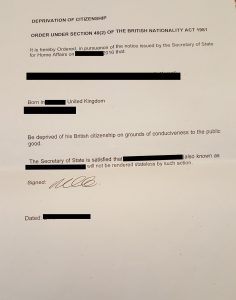 In cases where individuals are suspected of engaging in terrorism-related offences, citizenship deprivation usually operates on the basis of suspicion, rather than conviction, often drawing on intelligence gathered by security services, MI5.  In most cases the individuals served deprivation orders have not been charged or prosecuted in a criminal court, and since the order is granted by the Home Secretary it is a disciplinary technique that is not scrutinised by any independent judicial authority. Though there is a small window of opportunity to appeal against the order – the appeal must be made within 28 days of receiving the order- most individuals have been located outside of the UK when the deprivation order is granted, making it near impossible to appeal within the set parameters.

The order itself comes in the form of a letter that is usually sent to the person’s last known address in the UK, which may be their family home. In a number of cases individuals targeted have learned of their citizenship deprivation through family members, who have signed for letters from the Home Secretary in their absence. In some cases when individuals have tried to launch late appeals arguing that they were not informed of the deprivation order since they were abroad when it was issued (see cases of E2, NM) their appeals have been dismissed.

When appeals are made they are presented to SIAC, a court that overseas immigration cases where there are national security/ terrorism related concerns. SIAC decisions are made by three selected judges and no jury. The court hears evidence in a mixture of open and closed sessions, and decisions can largely be set out in closed judgements. In the closed sessions, appellants and their lawyers are not allowed to see the evidence against them but instead they are assigned a (security-cleared) special advocate to represent them, and with whom they are not permitted to communicate once the advocate has been privy to the evidence against them.

On the use of these special advocates appointed to serve at SIAC, one lawyer we spoke with said: ‘I have yet to come across a barrister that acts routinely for the Secretary of State in these kinds of proceedings that I would trust. And that is a terrifying thing to say about members of my own profession’. Another leading human rights lawyer have described the SIAC trials a ’Kafkaesque nightmare’ for her clients.

Amendment allowing statelessness for naturalised citizens if the Secretary of State believes individual is able to obtain a second citizenship Law introduced after Hilal al-Jedda case.

Following 9/11 and public outcry over Abu Hamza, section 40 of the British Nationality Act  was amended to allow for deprivation of British citizens when Secretary of State was satisfied that he had done anything prejudicial to the vital interests of this country