Mahdi Hashi is a former Brit who lost his citizenship in 2012, while in Somalia. He was then rendered from Somalia to the US and held in solitary confinement for three years. Hashi took a plea bargain for terrorism charges. In January 2016 he was sentenced to nine years in prison in the USA for supporting al-Shabaab. 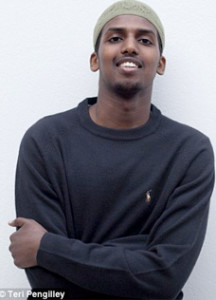 Mahdi Hashi had arrived in the UK with his family as a young boy. He was five years old when they arrived after fleeing the civil war in Somalia. On entrance he was categorised as an asylum seeker, a status which was upgraded at the age of 14 when Mahdi became a British citizen.  When, after finishing his GCSE exams at 16, Mahdi went to Egypt to study Arabic he, together with other friends a few years more senior, was detained by the Egyptian authorities. He was accused of associating with extremists and deported back to the UK. From that point on he began to be harassed by the British intelligence services.

Mahdi was active in his community.  At 19 he worked as a care worker and volunteered as a youth leader at Kentish Town Community Organisation.  Yet life remained precarious for him. When he planned to visit his sick grandmother in Djibouti in April 2009 as he checked-in at Gatwick airport he was stopped by two plainclothes police officers, one of whom called himself ‘Richard’ and told him that he worked for MI5. The officers attempted to befriend Mahdi warning him not to get on the flight, stating ‘whatever happens to you outside the UK is not our responsibility’.  Richard handed Mahdi a piece of paper with his name and telephone number on it and asked him to call, advising him again not to board the plane.  Refusing to be intimidated, Mahdi went on with his journey. But on arrival at Djibouti airport he was stopped at passport control, detained for 16 hours, and deported back to the UK on the request of the British authorities. When he returned he was detained again at Heathrow airport.  Richard appeared with coffee and breakfast informing him that it was they who had called for his return because he ‘was a terror suspect’ and made it clear that his ‘suspect’ status and travel restrictions would only be lifted if he agreed to co-operate with MI5. Mahdi refused responding that ‘This is blatant blackmail’. ‘No’, the officer replied, ‘it’s just proving your innocence. By co-operating with us we know you’re not guilty.’

Hitting back, Mahdi with friends who had faced similar experiences spoke publicly and reported their story to The Independent, as well as complaining to the Investigatory Powers Tribunal, reporting how they were repeatedly approached and asked to work as informants.  Mahdi wrote:

‘I myself am sick and tired of this cycle of savage harassment for the last three years to the point where they are making me a terror suspect … What have I done to deserve this and to be wanted and known as a dangerous terrorist. It looks like there is no way out.’

But speaking out against the state came back to bite. When Hashi returned again sometime later to Somalia to care for his grandmother he was detained by Al-Shabab who suspected he was working as a spy for the US.  Some months later he was released. But then he got punished by the British state with a deprivation order.

In June 2012 when Hashi was still in Somalia his father, Mr Farah, received a telephone call from Philip Larkin of the Home Office. The phone call was to follow up on an important letter that had been sent to Mr Farah’s address. The letter was a notice to deprive his son, Mahdi Hashi, of his citizenship. In the phone call Mr Larkin pointed out to Mr Farah that ‘his son was no longer a UK national, and had a discussion with Mr Farah as to the consequences’.  It was Mr Farah’s responsibility to communicate this news to Mahdi, who was in Somalia and thus difficult to contact. Philip Larkin informed Mr Farah that if his son wanted to appeal against the order he needed to do so within 28 days. With no British embassy in Somalia at the time, this would be near impossible to do.

Mahdi Hashi, then in Somalia, was soon after kidnapped and transferred to the USA via the extra-legal process of extraordinary rendition which has been strongly condemned by the Council of Europe. Having learned about the deprivation of his citizenship, Mahdi was on his way to appeal the order when he was detained by authorities in Djibouti along with two Swedish-Somalis. Held in a secret prison for months, it was there that he was interrogated by FBI officials. The interrogation by Djibouti and US officials came two months after Mr Farah had been notified of the deprivation of his son’s citizenship. Three months later Hashi was rendered to the US.  At a time when formal extradition proceedings were still proving cumbersome for British authorities due to the appeal procedures available to those accused, and in the aftermath of the negative exposure and reprimand of European states from the European Court of Human Rights (ECHR) for their role in the US-led ‘extraordinary rendition’ programme, the tactic used for disappearing Mahdi Hashi signified the possibility for alternative approaches.

The ECHR’s condemnation of the rendition programme, resembling ‘a “spider’s web” spun across the globe’, was vocalised in terms of the human rights violations that it invoked, violations that went against Europe’s legal and moral commitment to ‘rights, democracy and respect for the rule of law’.  Yet Hashi’s location outside of Europe placed him beyond the limits of that critique, positioned as he was beyond British jurisdiction.  Depriving Mahdi of his citizenship whilst he was visiting Dijbouti effectively disconnected his claim to Britain, to the entitlements and protections officially afforded to British citizens that would allow him, even if superficially, to claim human rights.  It marked an end of his access to European safeguards and also allowed the British government to absolve itself of the extra-ordinary violence that would surround his removal.  As his father, Mr Farah, commented in a radio interview, ‘It’s easier, I think, just to pass him to the Americans instead of extraditing him later on.’  His capture by Djibouti officials operating on behalf of the US made this transferral less arduous, less scrutinised, while it also permitted his exposure to uninhibited forms of violence. For the British state this form of expulsion operated through the denial of accountability.  Mahdi’s family experienced this first hand when they contacted the Foreign Office after learning of his capture and detention.  They were told that since he was no longer a British national he had no right to receive consular assistance.

After two and a half years in solitary confinement and maintaining a not-guilty plea, Mahdi Hashi’s case was expected to go to trial in spring 2015.  In the run-up to the trial, however, like most of those accused within the US criminal justice system, Hashi was forced into a plea bargain in May 2015 and pleaded guilty to material support, a highly controversial charge that acts as a black box for prosecutors since it allows all manner of deeds to be criminalised.  In a post-conviction statement the FBI reported that “between approximately December 2008 and August 2012, the defendants [Hashi and two other Swedish co-defendants] served as members of al-Shabaab in Somalia, where they agreed with others to support al-Shabaab and its extremist agenda”.  The complaints he had made to The Independent and to the regulatory authorities in May 2009 whilst living in London, i.e. that he was being harassed by MI5 who made it very difficult for him to visit family in Somalia, were not mentioned. In January 2016 Mahdi Hashi was sentenced to nine years in prison in the USA for supporting al-Shabaab. He has got a wife and a son in Somalia.