After 11 years of imprisonment, Babar Ahmad became the longest serving UK prisoner detained without charge. Arrested in 2004 Babar spent eight years in detention without trial before being extradited to the USA in 2012. He was finally released in 2015. 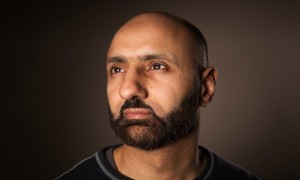 In the early hours of a day in December 2003 Babar Ahmad woke to a deafening bang outside his home. It sounded like a car had crashed into the front of the house. He woke from his bed and peered outside his bedroom window to see a column of riot police lined up in the front garden, perhaps about 15 in total. On a second bang they burst through his front door and he heard stomping boots traipsing up the stairs.  Convinced the officers had made a mistake Babar stood in a non-confrontational stance with his hands raised.  This did not have the effect he had hoped and after a few punches the police locked his hands behind his back and rammed him head first into a window.

Babar was an engineering postgraduate working at the time in the IT Department at Imperial College London. The officers, who had been trained to believe he was the leader of an al-Qaeda-linked cell, were told to prepare to confront a highly proficient terrorist, and accordingly to ‘deck and dominate’ the suspect in counter-insurgent fashion. Having removed his wife from the bedroom they beat him with their fists and knees, verbally abusing him as they did, stamped on his bare feet with boots, rubbed metal handcuffs on his forearm bones, and applied life-threatening neck holds to him until he felt he was about to die. They took him downstairs to his prayer room, sexually assaulted him by fondling and cupping his genitals and forced him into a prayer position. One of the officers taunted ‘you are in prayer now’ while others laughed. Another asked, rhetorically, ‘where is your God now?’ After which they shouted, ‘pray to him’. Babar would later tell a criminal court in which the officers were placed on trial “I had just been beaten and I was on the floor and they were laughing and there were jibes.”[1]

By the time he reached the police station he had sustained at least 73 forensically recorded injuries, including bleeding in his ears and urine. Six days later he was released without charge. During this time his house was thoroughly searched, his possessions removed for examination, and his biometric data was sent around the globe to US intelligence authorities.[2]

Upon his release Babar filed a complaint with the Independent Police Complaints Commission against the key arresting officers from the Met’s Territorial Support Group, Roderick James-Bowen, Mark Jones, Nigel Cowley and John Donoghue.  Photographs of his injuries, medical reports and expert opinions documenting the assault provided evidence to support his case. A report by an Accident and Emergency consultant physician who examined him noted that there was ‘clearly unequivocal evidence that he was subjected to harrowing physical and psychological assault’. Mr. Manolis Gavalas’ assessment of the injuries was that the aim of the police officers involved in this case ‘whilst waving the flag of ‘fighting terrorism’ was to inflict pain, humiliation and intimidation’.[3] Some advised that perhaps it might be best not to make trouble, lest they make more trouble for him. Babar went ahead with the complaint.

Detained in prison, this time Babar would remain incarcerated without trial in Britain for eight years whilst fighting extradition to the US, where he faced a lifetime in solitary confinement.

Eight months later in July 2004, following a thorough investigation of the evidence seized from his home Babar was informed by the Crown Prosecution Service that there was insufficient evidence to charge him with any criminal or terrorist offence.  But in August 2004, three weeks following, while on his way home from work Babar was re-arrested pursuant to an extradition request from the US in which they alleged that in the 1990s he had been a supporter of terrorism, committing terrorism offences in the USA from 1996 to 2003 despite being resident in the UK during this period. The accusations inferred he had tried to solicit support for terrorism in Chechnya and Afghanistan using websites that supported Chechen and Taliban rebel fighters. Detained in prison, this time Babar would remain incarcerated without trial in Britain for eight years whilst fighting extradition to the US, where he faced a lifetime in solitary confinement.  Concurrently, he pursued legal proceedings against the arresting officers.

In a police misconduct trial that followed Ahmad’s complaint, PC Roderick James-Bowen, one of the officers involved, was cleared of any wrong doing where it was noted he ought to be ‘commended and not castigated’.  When civil proceedings were later launched against the officers, the Met police offered Ahmad settlements, first for £20,000, then later for £60,000 to prevent the case going to court. Ahmad refused.  In an unprecedented victory the civil proceedings led to the Metropolitan Police finally admitting full liability for subjecting Ahmad to grave abuse tantamount to torture and offered again to pay him £60,000 in damages.  As a result of the exposure of this case the Mayor of London, Boris Johnson, announced an inquiry into the police abuse and eventually the Crown Prosecution Service charged the officers with actual body harm. However, when the case eventually got to trial the jury took only 45 minutes to reach their verdict of not-guilty and some of the jurors requested to meet the officers to shake their hands following the conclusion of the trial.[4]  None of the officers would face a disciplinary hearing and all were returned to full duties.[5]

Babar was extradited to the US in October 2012, along with four other Muslim men, after the European Court of Human Rights ruled that the prospect on long term incarceration in a US supermax prison  with lengthy periods in solitary confinement was not tantamount to torture and thus would not be a violation of his human rights.

He entered into a plea bargain after two years in solitary confinement in the US and was sentenced to 12 years?. He returned back to the UK in February 2015 (check)?

[5] Just before Babar’s trial a black police officer had raised a complaint against PC Mark Jones which led to a court case against him for assaulting two British-Arab youths- Jones was acquitted as ‘a decent officer’ (http://news.bbc.co.uk/1/hi/uk/8340813.stm).  Subsequently it was reported that PC Mark Jones and five other white police officers, all members of the Territorial Support Group, sued Scotland Yard for racial discrimination claiming that they were ‘sacrificed on the altar of political correctness’. They suggested they had only been charged because the force was scared of being called ‘institutionally racist’ if they did not accept the complaint of a black officer against a white officer http://www.telegraph.co.uk/news/8159606/White-policemen-sacrificed-on-altar-of-political-correctness-by-Met-Police.html