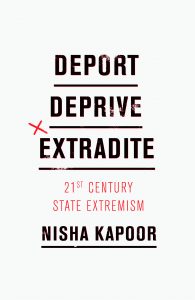 “A monumental study of how the ‘War on Terror’ has allowed states to operate outside the boundaries of reason and decency. This is courageous research, a book that should be read by all citizens of 21st century states that claim to be fighting extremism but have themselves become extremist states.”

– Vijay Prashad, author of The Poorer Nations: A Possible History of the Global South

“Nisha Kapoor has written a searing indictment of the expansive securitizing state and the racially driven authoritarianism out of which it grows and which it reinforces. A book that more than any other details the crippling impacts of politicized extradition on all those directly subjected to it as well as on social justice more generally. A must-read for all concerned about the secretive erosion of civil liberties and democratic life being carried out in the name of the ‘War on Terror.’”

“Kapoor gives us a precise, relentless, fearless analysis of a key space within which state racism has been cultivated. Deport, Deprive, Extradite is crucial to grasping a very British style of authoritarianism.”

– Arun Kundnani, author of The Muslims Are Coming

“Nisha Kapoor’s work is extraordinarily important, shining a torch on the deep structures of racism that infuse the security state. As the rhetoric of the War on Terror recedes, her research reveals the architecture of punitive practices that now link counterterrorism policing to border control. Her investigations into the new state powers to detain and deport are matched by a concern for the families and communities of those who are targeted, giving an eloquent voice to those who are rarely heard.”

– Vron Ware, author of Beyond the Pale

“Gripping, frightening, urgent—Nisha Kapoor’s book is essential reading for anyone trying to understand the shifting terrain of securitisation, racialisation and the rolling back of human rights. It should be required reading for every student, teacher and advocate concerned to challenge state racism. For those inclined to trust the government, this book reveals the hidden and not so hidden injustices carried out in y/our name. For those who find themselves in the sights of a securitising state, this book lets you know that you are not alone. For anyone who doubts that the treatment of those suspected of terrorism reveals a shift in state practices that can seep out into other realms, this book offers a careful but devastating warning. We understand, what can be done to them can be done to us. After this book, none of us can pretend again that we did not know.”

“With the rise of Donald Trump and others like him, we have to think about what sort of state the crisis-ridden governing center might bequeath to authoritarian reactionaries. Indeed, we have to think about what role the state has played in cultivating the new right.  The extreme center shows no sign of such reflection…Even the reviving left often hesitates to prioritize this issue. Nisha Kapoor’s astute diagnosis of modern “state extremism” in Deport, Deprive, Extradite: 21st Century State Extremism, is a welcome remedy.”

– Richard Seymour, author of Corbyn. The Strange Rebirth of Radical Politics, for Jacobin

“Kapoor’s carefully argued and well-documented book shows how the most powerful states in the world [have] deprived people of the ability to think and act. In so doing, they laid the foundations for a world on fire in which we all now reside.”

– Laleh Khalili, author of Time in the Shadows, for Times Higher Education

“The book is more than simply a theoretical exposition to me; it was also a work of activism deeply embedded in its own preoccupation with humanising the racialised/colonised. Too often we talk about violence as either theoretical and institutional, or interpersonal – Kapoor’s book reminded me of the necessity of both and the limit of one without the other…I will be thinking about this book for a long time – its micro stories and their pain and honesty, and its macro arguments and their ferocity.”

– Suhaiymah Manzoor-Khan, for The Bookslamist

“Nisha Kapoor has written a compelling and important book. With forceful academic rigour she rightly starts from the actual experiences of the people affected….She succeeds in revealing how this sharp-end deprivation of liberty has enabled governments to legitimize much more widespread lower-level breaches of human rights.”

“In this important study of the brutal consequences of the extradition and extraordinary rendition processes, Nisha Kapoor sheds much-needed light on the activities of the security state apparatus and how the ongoing ‘War on Terror’ has vastly expanded the boundaries of what states are able and willing to do to their citizens.”

“This is an essential text which documents the contradictions and complexities of terrorism legislation. The extensive bibliography indicates how far-reaching Deport, Deprive and Extradite is – ranging from postcolonial theory to security studies to international relations. Looking across race, class and gender to situate how these factors often impact and influence counter-terrorism judgements, the author carefully unpacks a range of arguments.”

“Nisha Kapoor’s book exposes how racialised subjects are dehumanised, and how the state’s securitisation agenda seeks to police and undermine political dissent”

Malia Bouattia, for The New Arab

“Deport, Deprive, Extradite: 21st Century State Extremism is an excellent resource to gain knowledge of the unjust reality of the U.S. war on terror . . .”

“Nisha Kapoor’s superb dissection of a process that has been underway in the heart of the British establishment is focused on bringing to light the often well-hidden evidence for this sinister development in the twenty-first century…Kapoor’s account, however, is not just a powerful description of how this operation has been conducted by the political and military elite, but also a cogent analysis of the conceptual apparatus that underlies it.”