Mohamed Sakr was a British-born man who got stripped of his citizenship in 2010. He was later killed by a US drone strike in Somalia at the age of 27. 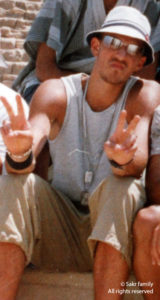 In 2009, Mohamed Sakr and his friend Bilal al-Berjawi left the UK for Somalia. They were thought to have travelled to Somalia to become involved with the militant group al-Shabaab. In September 2010, when in Somalia, the Home Secretary stripped Mohamed of his British citizenship. Despite being British born, Theresa May was able to strip him of his British citizenship because of his parents Egyptian nationalities. At the same time as Sakr was deprived of citizenship, Bilal al-Berjawi too got stripped of his. In February 2012, Mohamed was killed by a US led drone strike in Somalia, only a few weeks after the same had happened to his friend Bilal. After his death, Mohamed Sakr parents gave an interview in which they said that they accused the UK Government for the death of their child.

Mohamed’s parents argue that Mohamed was deprived his citizenship due to his association with Bilal al-Berjawi whom he has known since he was 12 years old. They questioned the guilt by association that might have been the underlying justification of his deprivation:

‘It says they took his freedom away because he knew Bilal! Does it mean that because I know a bad person it means I’m bad, or know good people that I’m good?’ – Mother of Mohamed Sakr

To protect the other family members, the parents have now renounced dual citizenship of all their kids in order to protect them. But as the law was further amended in 2014, the British government could deprive someone even if they only had British citizenship – provided that it was plausible that the individual could potentially secure another citizenship and not be left stateless.